Sometimes in life, part of the problem is that we forget to remember. We hope and think we will remember an experience forever, but life happens. There are everyday distractions, which sometimes make that fond memory harder and harder to access. I like to always take time to reminisce memories of the past, and now is the perfect time.  My older brother would have turned 42 today, June 23rd.

My big brother, Eric, was the person who was supposed to walk with me longer than anyone else in my lifetime.

It didn’t happen that way as it does with most siblings, because he got sick and passed away too soon.  Because this is the first birthday where I don’t have him physically with me to celebrate, call, or hug, I want to continue to talk about him and make sure pleasant memories will always live on. So today, I remember my brother on what would have been his 42nd birthday, by sharing some of the words I read at his wake service ten months ago. 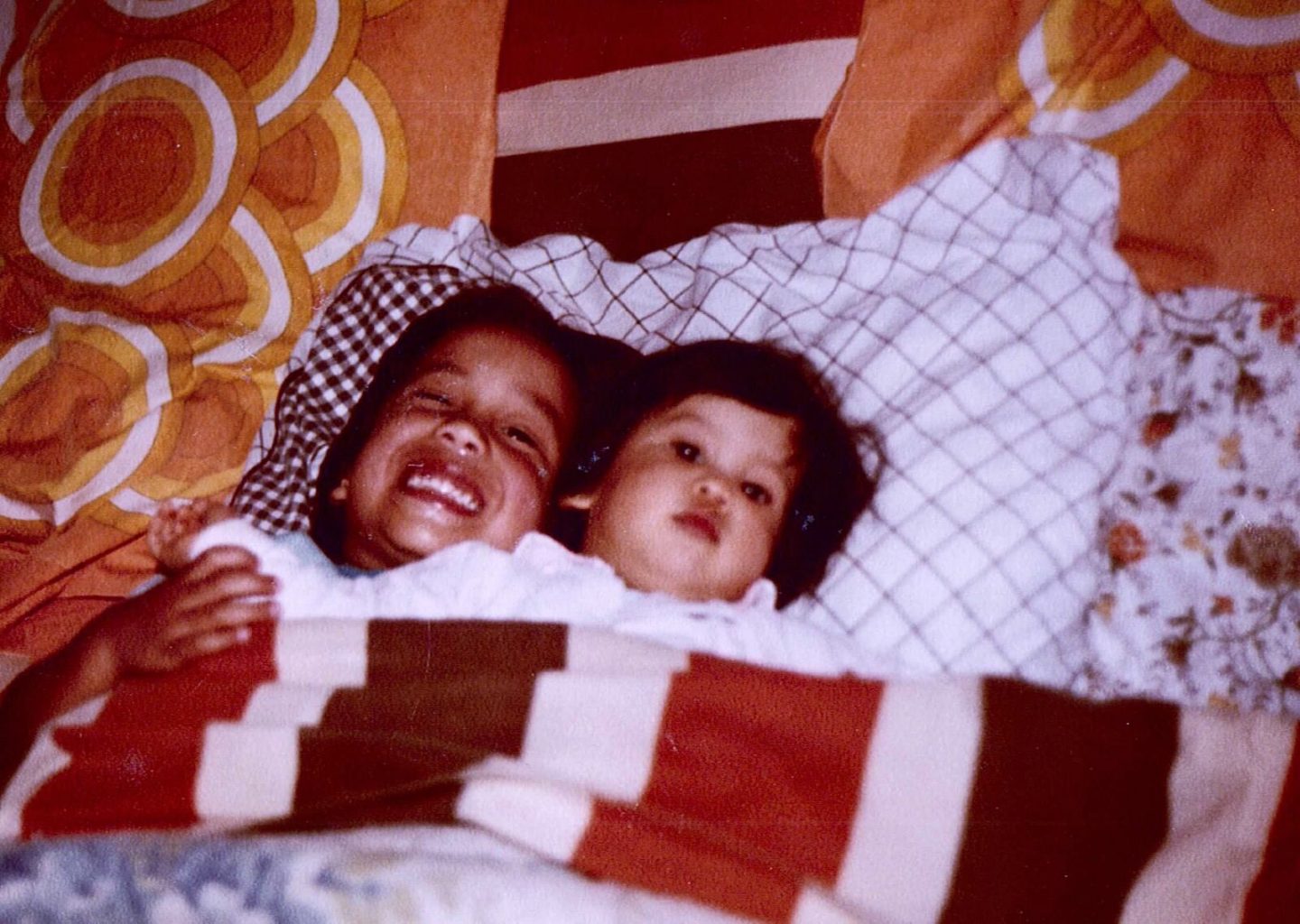 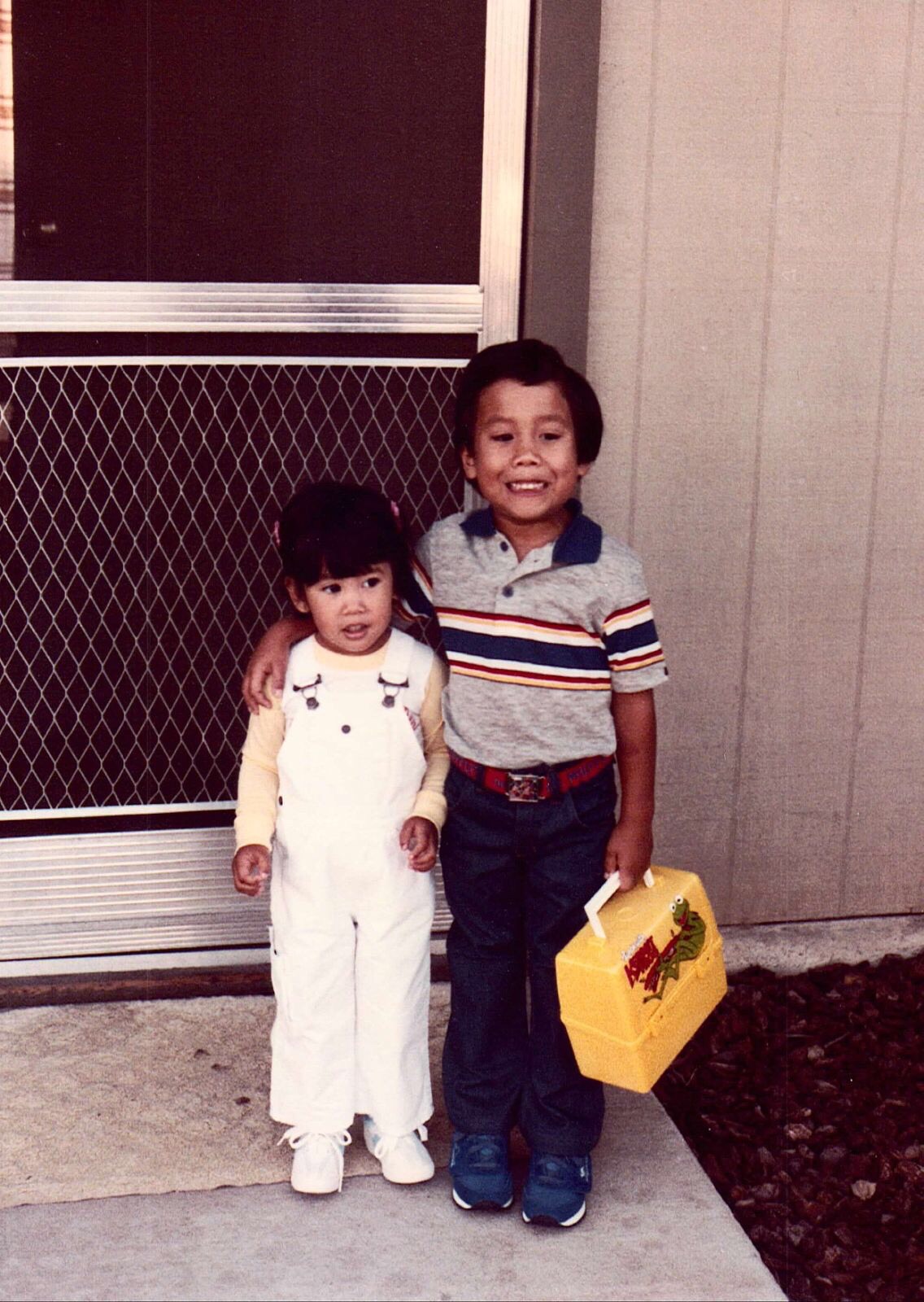 When Eric passed away, a lot of people reached out to me and shared some of their favorite memories.  As I listened to one story after another, I’ve noticed a common theme with each, and that is Eric’s selflessness. I’ve known just how selfless Eric was all my life, but it is touching to know that he was this way with each and every one of you.

As I thought of how he was to me as a brother, it really dawned on me that he was never ever mean to me, as most older brothers are…but I couldn’t think of one memory where he was truly mean. Eric was always a kind, protective brother to me…but that didn’t mean we didn’t get in trouble together. 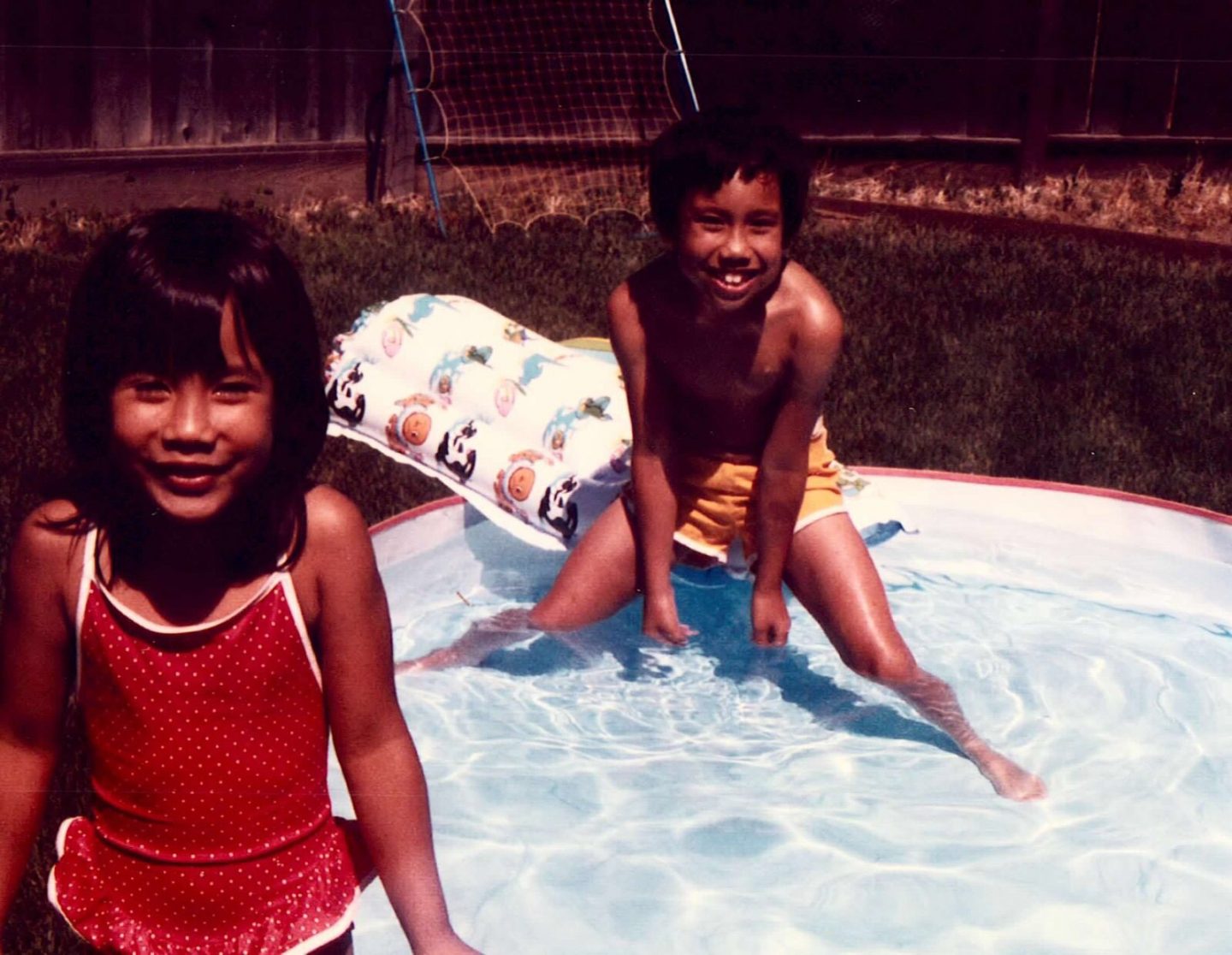 I remember one time right after my 9th birthday, it was the beginning of summer and Eric was about to turn 12. We were at home and we had my cousin Jennifer come over to play. Jennifer and I were playing in my room and Eric barges in with this huge bucket full of golf balls that we had collected earlier that year. He had this huge smile on his face and told Jennifer and I that he would go and hide the golf balls everywhere around the house. He went and did it and came back and demanded that we search and collect them all, kind of like an easter egg hunt. So we start collecting them, dropping each one into the bucket. We see about 5 on top of the chandelier, so we both get chairs to climb up to get them. Next thing you know, one of our chairs gets a little wobbly, and it falls against my parents shelf. The shelf probably had 3 glass layers, but to be honest I don’t really remember. What I do remember is the top shelf came crashing down on the middle shelf, and then the bottom shelf AND all of my parent’s wine glasses, trinkets, anniversary stuff on it. Jennifer and I stood there on the chairs, the floor below us entirely filled with broken glass everywhere and we burst out crying. Eric was standing from afar with a look of shock on his face. Thanks for the bright idea, Eric!

Growing up, Eric and I did everything together. I still feel like it was yesterday that we were watching DuckTales after school, which later moved onto CMC (California Music Channel) as we got older. When I was 15, he would be driving me around in the blue Toyota Camry to this local arcade called Keystone. We’d meet friends there, hang out for hours. He’d be yelling at me, “Come on Stacy, Mom’s gonna get mad. Let’s go home!”  But see, he wasn’t mean to me – it was for my own good. Before we went home for the night, we’d go to Taco Bell with all of our friends. He would always order tacos with no lettuce. He told our friends that he didn’t like lettuce because he choked on it once. My friends and I totally didn’t believe him because if you knew Eric, he just liked being funny. Well, this story of him choking on lettuce, my mom confirmed it last week! I can’t believe it took over 20 years for me to find this out.

I can’t even tell you how many San Francisco Giants games we attended together over the years. In one week, I think our record is 5 games in a span of 7 days. And one time, we even got the chance to meet Barry Bonds. When Barry Bonds was approaching, we were caught in a crowd full of people wanting Barry’s autograph or picture. In the last second, when Barry was about 5ft away from us, Eric says “We only have one chance because he’ll keep walking, so YOU take the picture with him.” I thought, “What, are you sure?” and before we knew it, Barry was there and the picture was snapped. We all know how huge of a Giants fan Eric is, so that shows how selfless he was and how nice of a big brother he was to me. 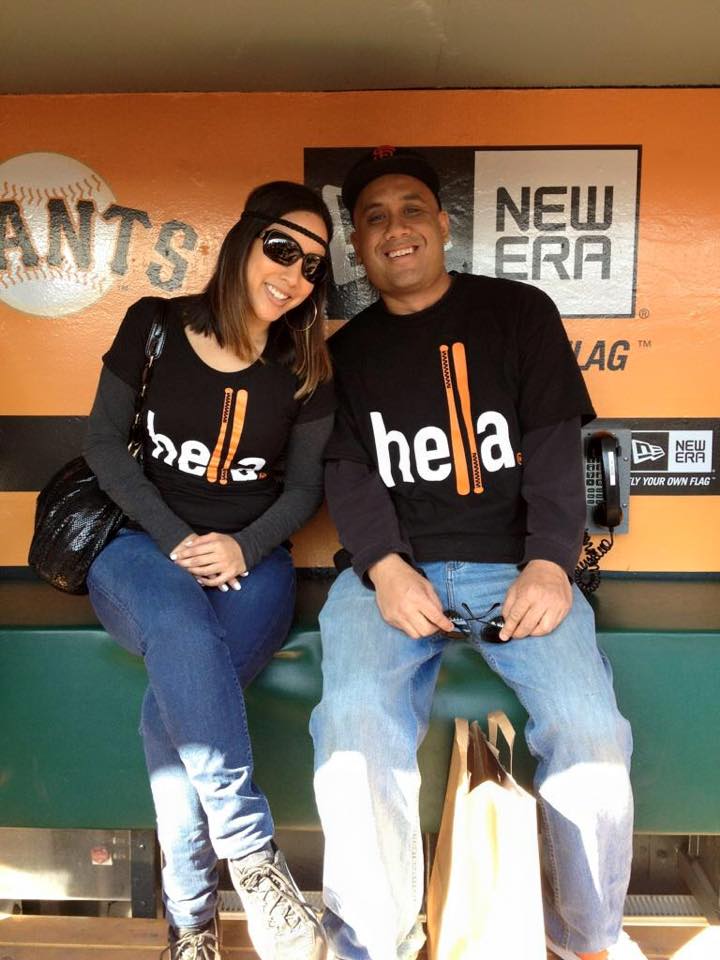 Eric was a private person. After we announced his passing, all the messages started pouring in. People told me they were shocked. Many of you said that you had spoken to him in the last month or two, but he never mentioned anything about his health. Eric didn’t want the spotlight, he hated being the center of attention, and just didn’t want people worrying about him. In fact, it’s such a funny thing that he didn’t want people worrying about him because he was the one that was the worry-wart! He was always concerned about other people’s welfare before his own. Even when times got tough and he was in the hospital, he would always worry about us.  We’d be sitting in his hospital room and HE’d be the one asking us if were we too cold, if we were too hot, or who was watching my son, Nico, or how his dog Arya was doing. He’s probably looking down at all of us right now, thinking, why is everyone crying over me? He would have said all of this is unnecessary. What I would tell Eric now, is that we’re not here because it’s necessary, we’re here because we love him and we want to honor him.

His smile and good looks, his silly charm, and the humor he provided will never fade. He was always trying to be so funny.  Even two days before he passed, my phone was laying on the bed next to him. He couldn’t speak anymore because of labored breathing, but yet he picked up my phone, propped up Nico’s toy dinosaur and took 2 pictures of it. It’s still in my phone, so now I have these 2 pictures of Nico’s toy dinosaur that means nothing to anyone, but everything to me. Looking back, this was the last silly moment I had with him. It’s these little things — seemingly insignificant pictures on my phone, golf balls, Giants games, Taco Bell. These are things that I will never take for granted because they will always remind me of my brother. And I can say that he was the best brother that I could ever ask for. 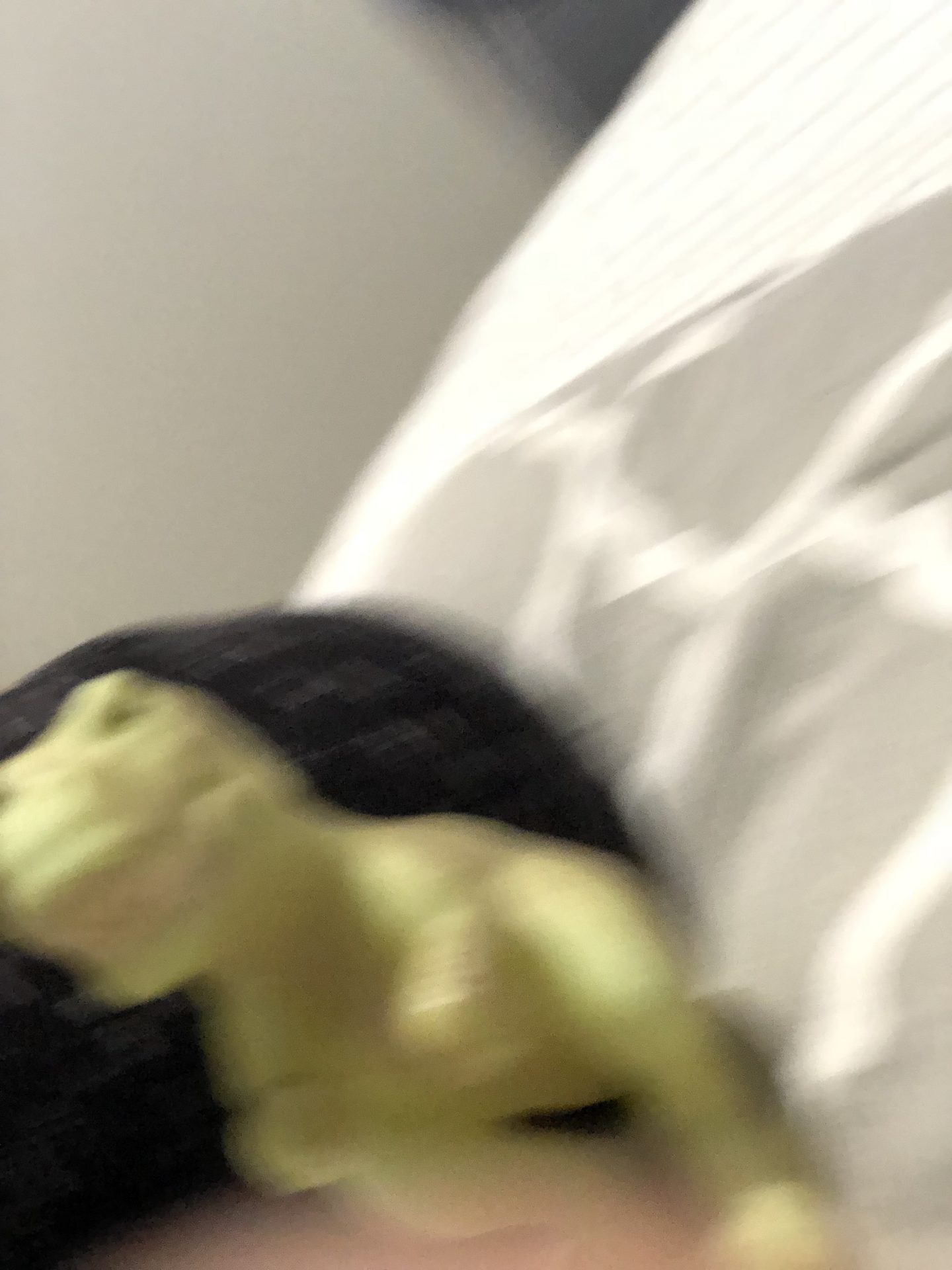 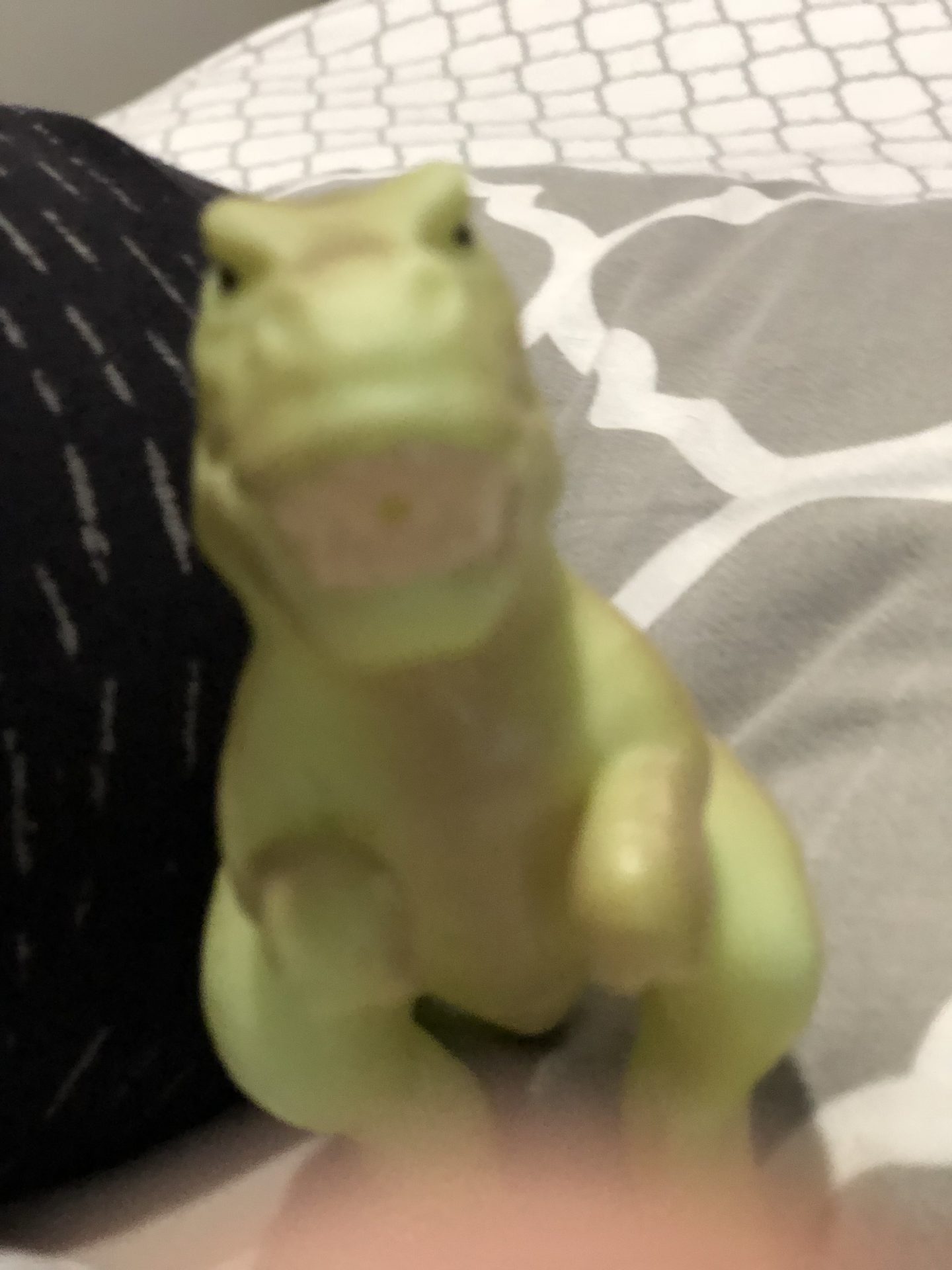 “And I will remember you. Will you remember me?

Don’t let your life pass you by. Weep not for the memories.”